X-ray security scanners are safe*.  You could happily use them all day and even eat you lunch off them.  They leave no trace or residue of radiation.

However, it is important to understand the radiation they use.

Ionising radiation occurs as either electromagnetic rays (such as x-rays and gamma rays) or particles. It occurs naturally (e.g. from the decay of natural radioactive substances such as radon) but can also be produced artificially. Everyone is exposed to natural background radiation.

Natral radiation comes from atoms within the Earth, as well as from cosmic rays.  Invisible, high-energy particles continually bombard Earth.  They account for about 82% of a person’s yearly radiation exposure.  In the late 1980s radon, a colourless, odourless, and tasteless gas that seeps up from the ground was recognized as a significant source of natural radiation. Radon accounts for 55 percent of everyones natural radiation exposure. Human-made sources account for about 18%.

The unit used to describe the radiation dose received is a Sievert. It is the SI unit of absorbed dose and is equal to one Joule/ per Kilogram or 100 rems.

We are exposed to x-rays from natural sources and human activities. The table below shows the level of exposure that we normally receive and the levels that are dangerous.

Comparative risks of exposure to x-rays 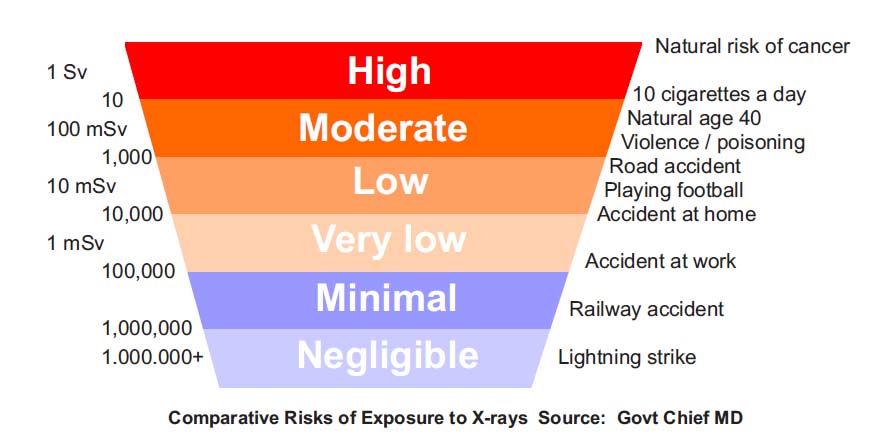 Shielding from x-rays is usually lead.  Most sources have shielding inside their case. Baggage scanners are lead lined, with lead curtains at each end of the tunnel.

Shielding reduces the amount of energy in the x-ray.

Spreading the dose over time

At only low doses are normally experienced, health risks are not expected to grow over time.  At high doses, such as in radiotherapy, time is allowed between exposures for repair and recovery.

X-rays and other forms of radiation can be dangerous unless they are managed properly. Governments across the world have developed their own Radiation Regulations.  These ensure that systems are safely installed and operated.

“At the levels typical of X-ray based security scanners, only stochastic effects could occur, but the predicted probability of their occurrence is very low and there is no scientific evidence supporting their existence.”

*  Obviously all rules and regulations must be obeyed.  The equipment must be regularly maintained and checked. Industrial and security x-ray systems must not be used on people or animals.