The new software, ThreatSpect, has been designed for even simpler navigation and ease of use during critical security situations where precision and speed is vital. 3DX-RAY is launching ThreatSpect today at Milipol, Paris, 18th- 21st October 2011 (UK Pavilion Stand 3B 095).

In high security situations, it is imperative to have tools that are quick, simple and effective. Reflecting these needs, 3DX-RAY designed its new software to offer maximum functionality but within a clean operating environment. Menus are context-driven to de-clutter the operating screen and give maximum screen space to the image, whilst also being streamlined to initiate functions with a single click. The design is also graphically-driven to improve usability and reduce training times. 3DX-RAY has also developed a tablet version of the ThreatSpect software to offer security operatives even greater portability options and an even simpler, touchscreen interface.

The new software, which is being rolled out across 3DX-RAY’s range of FlatScan portable x-ray systems, now features an optional direct link to the remote command and control centre so they can view what the operator sees on screen in real-time. ThreatSpect also features improvements to image annotation capabilities, increased flexibility for saving in common graphical file formats (such as JPG), and builds upon 3DX-RAY’s leading material discrimination technology.

Vincent Deery, Sales Director at 3DX-RAY, commented: “ThreatSpect builds upon 3DX-RAY’s existing system that was already well-known throughout the industry for its ease of use, bringing the technology into a contemporary design with new features and improvements. We pride ourselves in creating tools that are really fit-for-purpose and work as efficiently as possible in critical situations, and we are really excited to be rolling out ThreatSpect across the FlatScan family.” 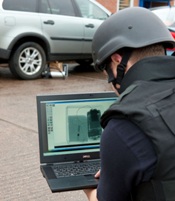