Archway walk-through Metal Detectors (AMD), are also known as Walk-Through Metal Detectors (WTMDs), portal or personnel screening metal detectors.  They are used to screen people for weapons or concealed contraband. AMDs are widely used in the security of building entrances, prisons, airports, hotels and banks as well as for other venues and events.

The system analyses metal objects and offers good recognition of personal items such as coins, keys, belt buckle, etc. It has high detection sensitivity for both magnetic and non-magnetic metals. The multi-layered coil design and high-brightness LEDs accurately show the horizontal position of any metal objects.  This speeds up and subsequent operator intervention.

Pulse induction (PI) detectors generate a time-varying or pulsed magnetic field that creates an electric current in metal objects as they pass through the archway. This current produces a separate magnetic field which is picked up by the detector. The system recognises this as a metal object.  PI detectors can sense both ferrous (iron-containing) and non-ferrous objects such as aluminium, brass, bronze, and copper.

Continuous wave (CW) detectors are similar but transmit an oscillating magnetic field. The detector analyses changes in the phase and amplitude in the resulting magnetic fields to spot the presence of any metal objects. CW detectors also detect both ferrous and non-ferrous objects.

Passive detectors sense the interaction between any metal and the Earth’s magnetic field. This type of detector can only sense ferrous metal objects. Aluminium and other non-magnetic metals are not magnetized by the passive Earth’s field and cannot be sensed this way.

Perhaps unexpectedly, the mass of an object is not particularly significant in metal detection.  The foil in a pack of cigarette could set off a detector despite its small mass. Metal detection depends on an object’s size, motion, shape, electrical conductivity, magnetic properties, surface area and alignment.  It is also influenced by interference from metal objects in the area. 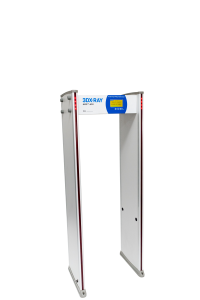 Some people worry about possible health side effects, particularly to pacemakers from archway walk-through metal detectors.  These fears are unfounded.  Archways produce tiny electrical fields that are much weaker even than a humble hair-dryer.   The fields are simply not strong enough to be of concern, even to patients with pacemakers.

3DX-RAY Ltd offers a range of optional service and support and training plans for its Archway metal detectors and other products.