“Counter-surveillance measures involve several stages to ensure 100% clearance, and perhaps the most obvious of these is conducting a physical search. There are, however, some things that you cannot physically dismantle for checking, for example table tops, foam seats and so on. With this in mind, it is vital that part of the sweep is non-destructive, and yet equally important that it remains effective. In these situations, x-rays are the most conclusive technology available.

X-ray technology has been part of the counter-surveillance inventory for over ten years, but for most of that time it has involved cumbersome and time consuming analogue systems. Even up to a couple of years ago, the x-ray equipment being used still involved x-ray foils that needed to be taken away for development and analysis. This is clearly not ideal, especially when counter-surveillance sweeps need to happen in a time-pressured situation. Not only that, but as the surveillance technology we are searching for has become increasingly smaller and complex (today we are talking about fingernail sized devices that can still transmit over 2km), so the analogue systems have become less reliable. Although analogue systems have very good resolution, they struggle with range of contrast, meaning, for example, that it is difficult to consistently identify the telltale wires that are a part of many listening devices. 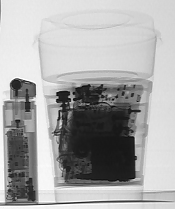 So for x-rays to remain a crucial part of the counter-surveillance effort they needed to develop higher levels of accuracy and be able to deliver instant results on site. At Gamma TSE, we were interested in an x-ray system that could deliver the highest resolution, digital x-ray images, to enable a fast 100% clear counter-surveillance scan.

We began working with 3DX-RAY as they specialise in the producing the highest possible resolution x-ray scans in a time-limited environment. Moreover, they were able to deliver the required resolution of image in an extremely robust and portable form factor.

Using the FlatScan TPXi portable scanner we can now scan non-destructible items as well as floors, walls and ceilings. By linking the scanner to a laptop, we can produce virtually instantaneous results at very high resolution and clarity, enabling us to make quick sweeps and deliver 100% clearance. The images are sufficiently high resolution for us to detect wires that may only be 1 or 2 millimetres thick.

Added to this, crucially, is the 3D capability. Rather than producing standard 2D scans, 3DX-RAY’s equipment can produce 3D x-rays of items. The 3D image outputs are far easier for our operatives to ‘understand’ visually and analyse, which means we can reach a threat decision far quicker. Not only that, but if we do suspect a threat, the 3D capability can also point us straight to the suspect element within an item by offering a sense of depth. For instance, a 3D image can tell us exactly where a bug is in a mobile phone so that we can go straight to it, without having to tear the whole phone apart.

We are always looking for technology that can speed up our checks, and working with 3DX-RAY has made a huge impact on reducing time spent on checking large items. The portable scanner system that we now use offers the largest scan area available on the market, which is crucial, as, with a small scanner, we may have had to do anything between 20 and 30 scans for a large table top. This is not only time consuming but also difficult to ensure that such a large number of scans line up correctly when you collate and analyse the images. With the new system we would do only 7 or 8 scans to cover the same table – a significant advantage.

We have also brought in a standalone ‘conveyer belt’ x-ray system to very quickly check the contents of a room. By either using the system to scan all items before they go into a room, or by putting everything we take out of a room through the scanner, we can very quickly check every item in the room.

What 3DX-RAY has enabled us to do is stay one step ahead in our counter-surveillance efforts. In this sphere, accuracy, reliability and speed are highly valued. Having the right technology at our disposal is central to everything we do, and having high quality, tailored equipment that meets our exact needs is critical in delivering the highest standards of service to our clients.”